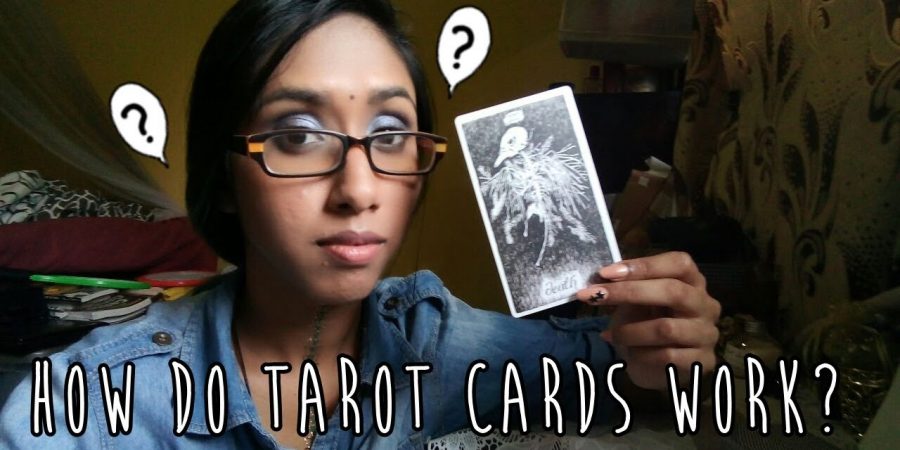 What are Tarot Cards?

Tarot cards are simply one of many tools of divination. These tools are commonly used to gain instant access to your intuition and your inner source of power and wisdom. It help you make good choices, and manifest your goals.

The Tarot deck is an ancient system of 78 cards, each with its own detailed image, enriched with spiritual symbols. The cards are divided into the Major and Minor Arcana. The 22 Major Arcana cards cards representing archetypal symbols of the human journey, also named the “process of individuation”, and the 56 Minor Arcana cards consists of 16 Tarot Court Cards representing 16 different personality characteristics. The Minor Arcana also includes 40 numbered cards which are divided into four suits with 10 cards each: Wands, Cups, Swords, and Disks and they reflect the trials that we experience on a daily basis.

In readings, the Major Arcana cards show up for important issues within a spread, while the Minor Arcana point to everyday issues. The Court cards represent people, or personality traits within ourselves.

As a divination tool, the Tarot cards symbols stimulate the subconscious mind of the reader as it tends to activate the right brain and call forth intuition.

Working daily with Tarot for over twenty years, I discovered that the Tarot is also a tool for personal storytelling and growth. Tarot cards can be our life storybook, the mirror to our soul, and the key to our inner wisdom.

After shuffling the cards, the reader arrange the cards in a pattern called the spread. The two most common Tarot spreads are the Three Fates and the Celtic Cross, but there are many other spreads.

The Celtic Cross consists of ten cards represent a variety of things including past and future influences, personal hopes, and conflicting influences.

The Tarot and channeling the energy

The Tarot cards work with your energy. When you shuffle the cards, your energy is being channeled into the cards and when you select the cards for your reading, the cards that are most relevant to you show up. Each reading is unique and meaningful to you in that moment and time, because it’s tapping into your energy at that times.

The Tarot and predicting the future

The way that Tarot works is to understand the present in order to predict the future. The cards don’t tell you exactly what will happen in the future. You will always have free will to make choices and take action that will ultimately lead to the way how your future will look like.

The Tarot helps you understand the present, and what path you’re heading down, and what challenges and opportunities you may encounter during your journey. If you don’t like the outcome that the cards show, you can take action now and change your future.