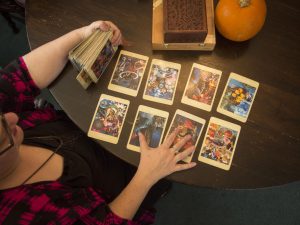 Tarot cards may be the most common and identifiable tools that psychics use to do readings. There is nothing magical or mystical about the cards themselves. Instead, the cards act as an information organization and gathering system that can help psychics answer peoples’ questions and help discern a clearer course of action.

Playing cards were first used in in Europe in the late 14h century. An early form of tarot cards were used in northern Italy for a game called tarochini. Between 1430 and 1450, the first known cards dedicated to tarot were developed the common four-suit pack received the addition of illustrated trump cards. The cards were illustrated with allegorical symbols. Mystics used these cards beginning in the late 1600s.

Esoteric principles became associated with tarot cards in the next few hundred years that followed. A French protestant pastor, Antoine Court de Gebelin, wrote an essay in 1773 that became the base of the theory of Tarot.

A new tarot deck was published in 1910 by William Rider & Son. Each card in this deck was illustrated with mystic symbols. A. E. Waite published a guide to the new deck in 1911. The Rider & Son deck quickly became the most popular deck among English speakers, and has remained so ever since. New decks debuted in the years since, especially more recently, when New Age teachings became popular in the 1970s and the 1980s.

Psychics use tarot cards as a method of gathering information. The cards have symbols from alchemy, astrology and numerology. In order to perform an accurate reading, the reader must be gifted with intuition. But the symbols on each card also carry specific information.

Fourteen cards of four suits are the Minor Arcana cards. Each suit contains four court cards and 10 sequentially numbered cards. Modern playing cards are based on the Minor Arcana cards, but in tarot the symbols are different: instead of hearts, diamonds, clubs and spades, the tarot cards have cups, pentacles, wands and swords. Each symbol represents something: cups are related to relationships, pentacles deal with finances, wands relate to communication, and swords represent trials and difficulties. 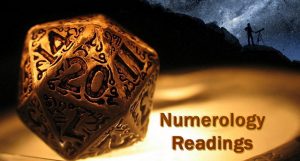 Numerology is the source of meaning for the numbered cards. The four court cards are king, queen, knight and page. The court cards can represent people involved in the answer to the question asked in a reading, or even facets of their personalities. An experienced tarot reader can even give indication of possible timing of future events based on certain cards and where they appear in a spread.

Experienced tarot readers must also know what the position of a card in a spread represents. For example, if a certain card appears upside-down, it may have a different meaning than if it appears right-side up. There are also different spreads in which the cards may be positioned. Answers to questions can be brought into clearer focus based on the spreads used.

For example, a person may be pondering a move to a different part of the country. Several factors may be playing into that plan. The person may be feeling like a certain chapter in his life is closing. The person may feel it would be advantageous to make the move, because he could live closer to a dear relative in a more pleasing climate.

But a tarot reading could offer some insights into this decision. Readers will often use the Celtic Cross spread for questions such as this. The reader may discern in such a reading that multiple cards are at cross-purposes, so the person is not clearly seeing the situation before deciding what to do.

An experienced reader may note that a reversed pentacles card indicates unsettled financial matters. Or the positions of the cards in the spread could be advising the person to take his time in making the decision, or that things in his current situation are not as bad as he’s perceiving them to be. A reversed heart card may show that unhappiness is passing.